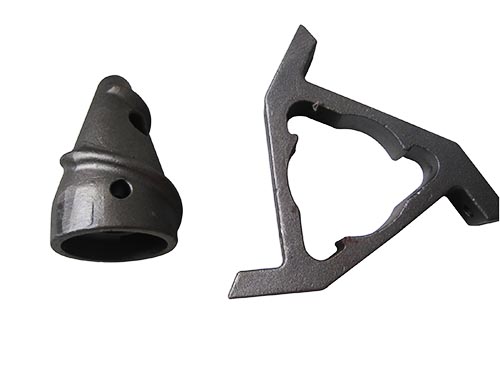 At present nicety casts have two kinds of engineering technology: Nicety of the law that break candle is cast and pressure regulating figuration nicety casts a technology.
Nicety of the law that break candle is cast say fusible pattern nicety is cast now, it is a kind of little cutting or the accurate foundry technology that do not have cutting, it is nicety casts one of the industry superior engineering technology, its application is very wide. It applies to the nicety of all sorts of all sorts of types, alloy to cast not only, and quality of the cast dimension precision that production gives, surface casts a method to want than other nicety tall, even other nicety casts a method be hard to the complex, high temperature resistant, does not machine easily cast that casting gets, all can use fusible pattern nicety to cast casting to get.
Pressure regulating one when cast manufacturing difficult problem and invent when figuration nicety casts a technology to basically be aimed at component of large and complex Bao Bi new-style cast a technology. Use this technology production is large and complex thin wall cast, it is better to can be obtained fill model ability and fill shrink ability, make cast grain is refined, send density to promote, function gets clear improvement. As the ceaseless research of this technology and development, the applied effect of this technology and suitable scope got be strengthened ceaselessly and widen. Current and pressure regulating figuration nicety casts a technology to already was in some aviation kind large and complex Bao Bi got the project turns application in production of aluminium alloy cast, technical benefit is very apparent.

More and more mechanical products use nicety to cast, the two big advantages that basically cast with nicety do not divide:
1. Nicety casts the complex cast that makes all sorts of alloy, particularly OK and accurate cast cast of high temperature alloy. Be like the lamina of jet-propelled engine, its are clipper-built outside outline and refrigeration use lumen, with machining craft cannot be formed almost. With accurate foundry technology production can accomplish batch production not only, assured the consistency of cast, and the stress concentration that Dao Wen remains after avoiding machining.
2. Because fusible pattern cast is having very tall dimension precision and face,nicety is cast bright and clean degree, can reduce machining work so, just ask on the spare parts higher position leaves a few mental allowance can, certain even cast leaves surplus of burnish, polish only, need not machining can be used. This shows, use nicety to cast a method to be able to save machine tool equipment and treatment man-hour in great quantities, substantially managing metallic raw material.